are honored to present the

An ongoing forum for the Connecticut legal community to explore issues of racial inequality and systemic racism. 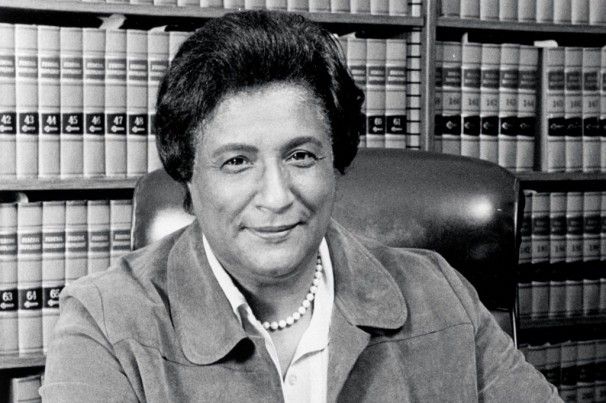 This series is named in honor of civil rights trailblazer Judge Constance Baker Motley
with the goal of supporting and fostering renewed commitment to advancing civil rights and social justice.

The CBA Task Force's Recommendations on Policing in Connecticut

In the wake of the George Floyd homicide, a diverse group of attorneys, community members, and law enforcement leaders met on a weekly basis for over a year to discuss, research and make recommendations to the State legislature and other stakeholders regarding policing in Connecticut. It is anticipated their work will culminate in a written report to be publicly released this fall. In this session, leaders and key members of this Task Force shared what they learned and what they recommend we do to address the challenges in policing and to improve relations between police and the communities they serve.

The Trials of Constance Baker Motley: A Centennial Retrospective

September 14, 2021 marks what would have been the 100th birthday of Judge Constance Baker Motley. In this inaugural series event for the 2021-2022 bar year, we are celebrating the life and legacy of Judge Motley. We will start with a screening of The Trials of Constance Baker Motley, a 2015 documentary produced by her son, Joel Motley. The documentary spans her remarkable legal career, including, but not limited to, her work with Justice Thurgood Marshall and the NAACP and her landmark civil rights cases before the US Supreme Court, as well as her accomplishments as the first African-American woman elected to the New York State Senate, the first woman elected as Manhattan Borough president, and the first African-American woman appointed to the federal bench. The documentary will be followed by a discussion and reflection on Judge Motley with her son Joel W. Motley, niece Constance L. Royster, and former law clerk Daniel J. Steinbock.

The Color of Law: A Forgotten History of How Our Government Segregated America

Racial segregation characterizes every metropolitan area in the US and bears responsibility for our most serious social and economic problems. We’ve taken no serious steps to desegregate neighborhoods, however, because we are hobbled by a national myth that residential segregation is de facto—the result of private discrimination or personal choices that do not violate constitutional rights. The Color of Law demonstrates, however, that residential segregation was created by racially explicit and unconstitutional government policy in the mid-twentieth century that openly subsidized whites-only suburbanization in which African Americans were prohibited from participating. Only after learning the history of this policy can we be prepared to undertake the national conversation necessary to remedy our unconstitutional racial landscape.

Chief Justice Richard A. Robinson will facilitate a question and answer segment with Rothstein. A panel discussion will follow to highlight what has been done in the past year and how we will continue to address racial inequality in Connecticut in honor of the legacy of Hon. Constance Baker Motley.

Richard Rothstein is the author of "The Color of Law: A Forgotten History of How Our Government Segregated America", a "New York Times" Best Seller, and a distinguished fellow of the Economic Policy Institute, the Thurgood Marshall Institute of the NAACP Legal Defense Fund, and of the Haas Institute at the University of California (Berkeley). In addition to "The Color of Law", he is the author of many other articles and books on race and education.

Note: The first 100 attendees of this seminar who request a copy of featured speaker Richard Rothstein’s book, The Color of Law, will receive a free copy.

This event is one of the Evening Plenaries of the 2021 Connecticut Legal Conference.
Learn more about this virtual three-day event featuring national and local leaders in the law, including Matthew Desmond, Rebecca L. Sandefur, Neal Katyal, and more at ctlegalconference.com.
Cost
$129 Members
$400 Non-Members - includes a year of free CBA membership

The recording of this event will be made available shortly.

In a tumultuous year that has brought long-avoided issues of racial injustice to the fore, Connecticut is considering certain proactive steps to try to eradicate racial bias in jury selection and deliberation in both civil and criminal cases. Following the release of specific recommendations by the Jury Selection Task Force appointed by Chief Justice Robinson, this event will explore the proposals aimed at identifying and eliminating various forms of conscious and unconscious bias from jury selection and deliberation. Attendees are encouraged to review the Task Force Report and pose questions for the panelists both before and during the event.

Panelists in this session will include Task Force chairs and participants, who will discuss:

If adopted, the proposed changes will substantially alter the jury selection process in Connecticut to ensure that a fair cross section of the population is serving on juries, and put our state in the forefront of those attempting to improve racial justice in our courts at a time when many question the fairness of our judicial system.

The Fair Housing Act and Insurance

The test for determining discriminatory effect, so as to establish actionable discrimination under the FHA, has been considered extensively in the courts. Rulemaking during the Obama administration attempted to codify this. Most recently the Department of Housing and Urban Development sought to restate this rule, ostensibly to reflect a Supreme Court decision (Inclusive Communities). With the rule being challenged in the courts and a new administration, how this will impact homeowners insurers hangs in the balance.

This panel will feature legal scholars and experts who study historical and ongoing inequities in our banking system and financial services more broadly, and/or who are actively engaged in working to address those inequities through policy activism and innovation within the industry.

Language and the Law

This webinar will focus on the impact of language in the legal profession, particularly how diverse languages, accents, dialects and proficiency levels of parties, witnesses, lawyers and jurors impact legal professionals' perceptions of their legitimacy, credibility and professionalism.

Policing and Race in America: Past, Present, and Future – Part 2

This session will focus on biases in policing and the impact on communities, mainly communities of color. Panelists will provide insight into strategies and changes some police departments have implemented to mitigate bias and improve community relations.

This panel will feature scholars and/or advocates who will show how structural racism operates to the disadvantage of domestic workers, immigrant workers, and workers entangled in the criminal justice system, among others, and what it would take to combat that structural racism.

Policing and Race in America: Past, Present, and Future - Part 1

How did policing start and evolve in America and what is the role that race has played in the formation and development of police departments and policing? Learn about the history of policing and join our panel to discuss the current role of race in how departments police their communities.

Equity Through Zoning Reform in Connecticut

This program will feature land use attorneys, including two law professors, discussing how the structure of land use decision-making in Connecticut can impede policies and decisions that promote racial and economic equity, with a focus on several types of exclusionary zoning regulations; and current efforts to revise state zoning laws to promote desegregation.

How the Law Structures Educational Inequities

This panel will feature legal and education scholars who study inequities in primary and secondary educational systems, how school districts are organized and funded, and how inequities manifest in differential school funding, resources, and outcomes.

This 90-minute seminar draws on the experiences of legal academics, elected officials, and political observers to explain how certain fundamentals of our democracy are used to disenfranchise citizens – limiting who has political power, who exercises the right to vote, and who has a voice in our government institutions – on the basis of race. The seminar will explore the systems that perpetuate racial inequality in voting rights and political access: the history and dangerous effects of “gerrymandering”; the dismantling of the Voting Rights Act of 1965, which was enacted to help achieve racial equality and representation; and how voter restriction and intimidation efforts accomplish racial disparities in the exercise of voting rights. The programming will look at historical patterns and trends, and how systemic racism impacts voting rights and political access on the national stage and in Connecticut.

This 90-minute seminar uses maps, original photographs, and oral histories to explain how 100 years of discriminatory land use and development policy built and maintains our segregated state. The seminar will also examine the lasting effect these policies have on housing choice and the lives of people of color, particularly lower income Black and Latino families, who have few options to move to areas with high performing schools and safe neighborhoods. The programming is Connecticut-specific and demonstrates how national level policy and funding continue to influence local development and the lives of Connecticut residents.

This is the inaugural event of the Constance Baker Motley Speaker Series on Racial Inequality, an ongoing forum for the Connecticut legal community to explore issues of racial inequality and systemic racism. This virtual event features Chief Justice Richard A. Robinson and Justice Maria A. Kahn and was moderated by Dean Timothy Fisher of UConn School of Law and Professor Marilyn Ford of Quinnipiac University School of Law.

Born and raised in New Haven, Connecticut, Judge Motley was recognized by Resolution of the United States House of Representatives of the 110th Congress in 2007 for her “lifelong commitment to the advancement of civil rights and social justice.”

Motley was the first female staff attorney at the NAACP Legal Defense and Education Fund (LDF), hired by then Chief Counsel Thurgood Marshall. She argued and won many of the defining cases in the civil rights movement, including those to desegregate schools and universities, housing, transportation, and public accommodations. Motley later became the first Black woman appointed as a federal judge, rising to Chief Judge of the United States District Court for the Southern District of New York in 1982.

Learn More
This form needs Javascript to display, which your browser doesn't support. Sign up here instead
Close