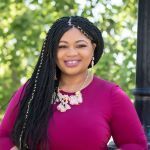 Dr. Khalilah (Ka-Lie-La) L. Brown-Dean is Associate Provost for Faculty Affairs and Professor of Political Science at Quinnipiac University. She holds a B.A. in Government from The University of Virginia and a Ph.D. in Political Science from The Ohio State University. Previously she served as Senior Director for Inclusive Excellence at Quinnipiac where she oversaw campus wide efforts to develop curricular, professional, co-curricular, and experiential offerings that enhance equity. She is founder of the Inclusive Excellence Teaching Lab; an interdisciplinary cohort of scholars with a demonstrated commitment to, and interest in, equity-driven learning. Her scholarship appears in numerous academic and public outlets to center the role of identity in shaping access to democracy, justice, and representation. Her most recent publications explore voting rights, civic engagement, and the politics of punishment. She is the author of Identity Politics in the United States (Polity Press 2019) and co-author with Ray Block, Jr. of Penn State University of a new project entitled Protesting Vulnerability: Race and Pandemic Politics (Cambridge University Press). She has held elected and appointed positions in the American Political Science Association, the National Conference of Black Political Scientists, the Association for Ethnic Studies, and is the Immediate Past Board Chair of the Community Foundation for Greater New Haven. It is one of the oldest and largest community foundations in the United States, and the largest grant maker in a twenty town region. She currently sits on the board for New England Donor Services and was named one of the 25 Most Influential Women in Higher Education by Diverse Magazine. Brown-Dean is a highly sought after political analyst with contributions to The New York Times, MSNBC, L.A. Times, Fox News Radio, Universal Media Group, the Congressional Black Caucus, Democracy Now and other outlets. She hosts the weekly Connecticut Public Radio show and podcast, Disrupted and is passionate about inclusive community development. In 2021 the Connecticut Women’s Hall of Fame recognized her as a Spotlight Recipient for Social Justice and the Connecticut State Conference of NAACP branches named her one of the 100 Most Influential African Americans in the state.