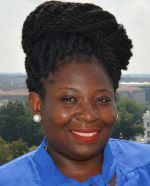 Evelyn Chumbow is a survivor of child labor trafficking turned anti-trafficking activist and public speaker who focuses her life’s work on ending modern-day slavery. Chumbow was brought to the United States from Cameroon at age 9 and forced to cook, clean, and care for her trafficker’s children. She was never paid for her work, and any hope that she might escape was undermined by the constant beatings she received from her trafficker. After years of captivity, she finally escaped and her trafficker was sentenced to 17 years in prison.

Today, Chumbow works tirelessly to raise awareness and advocate for other survivors in the U.S. and abroad. She has been invited to brief several government agencies about human trafficking from a survivor’s perspective, including the Department of Homeland Security, the FBI, the State Department, and the Department of Justice. Chumbow was appointed by President Obama to serve on the U.S. Advisory Council on Human Trafficking. She strongly believes in the need for professional development for survivors and dedicates her time volunteering at the grassroots level to guide communities on how to create employment opportunities for trafficking survivors.