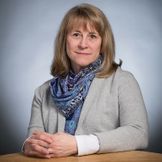 Jennifer Brown received her A.B. from Bryn Mawr College in 1982 and her J.D. from the University of Illinois College of Law in 1985.  In 1985-86, Brown served as a law clerk for the Hon. Harold A. Baker, U.S. District Court (C.D. Ill.).  She practiced law in litigation at Winston & Strawn in Chicago before entering legal academe as a Bigelow Fellow at the University of Chicago.  From 1990-1994, she was an assistant and then associate professor of law at Emory Law School.  She joined the Quinnipiac Faculty in 1994 and became a Full Professor in 1996.  From 1997 until 2013, Brown also served as Director of Quinnipiac’s Center on Dispute Resolution.  In 2013, she was appointed Dean of the Quinnipiac University School of Law, and during the 2019-2020 academic year, served as the Interim Executive Vice President and Provost of Quinnipiac University. Over the years, she has taught as a visitor in the law schools at the University of Illinois, Georgetown, and Harvard.  For several years she served as a visiting lecturer and senior research scholar at Yale Law School. Her areas of expertise include alternative dispute resolution, LGBT legal issues, and lawyers' professional responsibility.