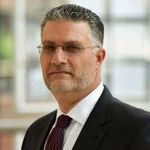 Richard J. Colangelo, Jr., is the chief law enforcement officer of the State of Connecticut and administrative head of the Division of Criminal Justice, the independent agency in the executive branch of state government that is responsible for the investigation and prosecution of all criminal matters in Connecticut.

A career prosecutor, Chief State's Attorney Colangelo has served in various capacities, most recently as State's Attorney for the Judicial District of Stamford/Norwalk. He has vast experience trying major felony cases and has been involved intricately in criminal investigations and criminal justice education for decades.

He and his wife, Attorney Carolyn Colangelo, are the proud parents of four children.