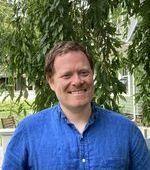 James Bhandary-Alexander is Clinical Lecturer in Law, Associate Research Scholar in Law, and the Legal Director of the Medical Legal Partnership at the Solomon Center for Health Law and Policy at Yale Law School. Previously, he worked as an attorney at New Haven Legal Assistance, where he represented clients in labor and employment, housing, public benefits, police misconduct, and civil rights cases, and as the Thomas Emerson Fellow at the law firm of David Rosen & Associates. Bhandary-Alexander also served as co-chair of Connecticut’s Low-Wage Employer Advisory Board and on the state’s Task Force on Domestic Workers. In 2016, he received the Micah Award from the Naugatuck Valley Project and the Brazilian Worker Center; and in 2019, he received the Unsung Hero Award from the Morris and Irmgard Wessel Fund. He has been interviewed about his cases by the New York Times, Bloomberg News, Sports Illustrated, In These Times, the Hartford Courant, and many other publications. Bhandary-Alexander was a Public Interest Law Scholar at the Northeastern University School of Law, where received his J.D., and graduated with degrees in History and Afro-American Studies from the University of Wisconsin-Madison.